If you’ve ever heard Theo Peoples’ voice, it’s no secret why many regard him as one of the most ‘AUTHENTIC’ voices in the music industry and agree he has raised the bar high because of his soulful vocal style!. For nearly two decades Theo Peoples’ voice has been critical to the legacy of not just one but two of Motown’s iconic groups – the ‘Temptations‘ AND ‘The Four Tops‘! With classics like “Baby, I Need Your Loving”, “Reach Out (I’ll Be There)” and “Ain’t No Woman (Like The One I Got) by the Four Tops to name a few, he has earned the singular honor of being the only man to be a member of both legendary groups, and his bona fide voice has been a ‘well received’ contribution in both cases!

Peoples was discovered and hand selected to join the ‘Temptations’ group in 1992. His prototypically soulful and muscular vocals often elicit comparisons to some of soul music’s greatest vocalists from within the Temptations lineup throughout the years such as, David Ruffin, Dennis Edwards, and Ali Woodson. During his six year tenure with them, he recorded on two albums, seized the spotlight with a flawless rendition of the classic song, “Night and Day” on Mel Gibson’s romantic comedy film, ‘What Women Want’, as well as, composed and masterfully sang his own devotional composition, “This Is My Promise”. 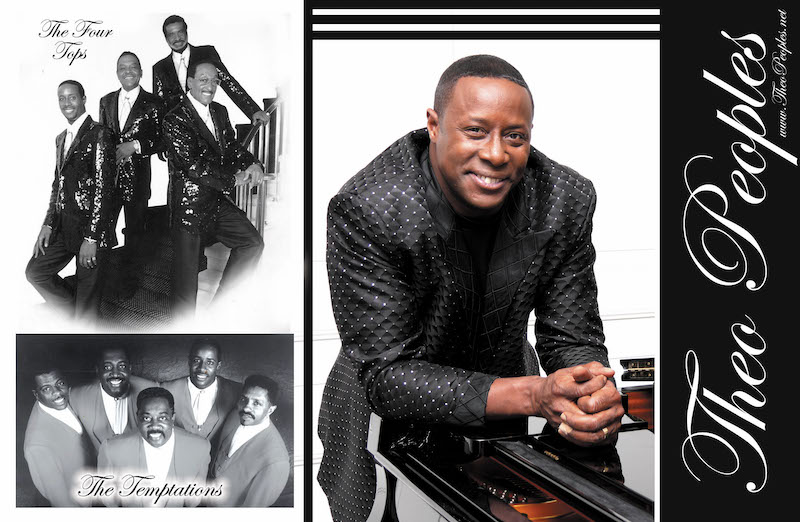 Having made his national debut as one of the ‘Temptations’ and earning the reputation as ‘The Voice’, he once again was a choice pick in1998 by a second legendary group, “The Four Tops” (after original member Lawrence Paytons’ death). Shortly after joining the group, Peoples was personally handed the successor’s torch by Levi Stubbs (Four Tops original lead vocalist.. in the year 2000) after his retirement due to illness. After twelve years of touring with the Four Tops, Peoples managed to leave a stamp on their legacy, and paid brilliant homage to Levi Stubbs.. recreating memories of classic ‘Four Tops’ songs with his own indelible vocal style. He has shared the stage and the studio, holding his own, with legends such as…. Aretha Franklin, Smokey Robinson, Stevie Wonder, and Bill Medley (of the Righteous Brothers),.. just to name a few!

From the First Baptist Church of Chesterfield, MO to England’s Royal Albert Hall, to Carnegie Hall of New York City and on to the White House….. Theo’s musicianship has gained him entrée into exclusive circles of the musical elite!

While embarking on the next chapter of his music career, Theo continues to showcase not only his vocal ability in premier private clubs around the world, he is sharing his skills as a musician creating new memories of his own and for others! What can fans expect from a live experience with Theo? Loving homage to his Motown roots mixed in with his own unique take on smooth R&B balladry, and Classic Rock~ a performance that won’t disappoint! Make an effort, a time, a date to enjoy a talent that is truly achieved singular accomplishment………………….THEO “The Voice”!

Voices of Classic Soul returns to the Carlyle Room